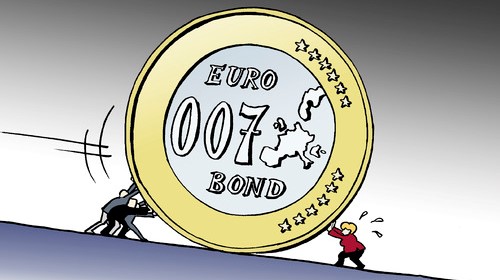 ‘Eurobonds’ are securities denominated in a foreign (respect to the country of issuing) currency. Then, why everybody is so concerned, especially now days, about something that exist since 1963 – when Autostrade issued in Italy for the first time 60.000 bonds denominated in U.S. Dollar? Well, the ‘Eurobond’ we are talking about is also called ‘stability bond’, a government’s bond, denominated in euro, issued jointly by eurozone states. Again, ‘what’s the point?’, we all know sovereign is issued also, if not primary, through traded securities. The point here is what is underlying the issues of common government securities, i.e. interest rates and collaterals.
In this series of articles, we will explain what Eurobonds are, why there are so many concerns around them and if they could be developed someday soon. In particular, we will go through European peculiarities and we will analyse all viable options to face extreme conditions as it is for COVID-19.

Someone tried to bribe Germany

In previous articles we have seen various experts’ and politicians’ points of view and proposals on Eurobonds, but none of them directly addressed the need for EU completion.
Also, none of the countless worlds I spent are meaningless to me, nor neutral. I clearly chose a side, the one of economists, growth and solidarity. I like to think I’m not alone in this fight and indeed, on May 24th, 2012, on the journal Il Fatto Quotidiano Mario Monti highlighted again the need for a European project for growth. In the same article he was reported saying Italy was ready to both communitarian projects and mutual budget. Concerning the latter both him and Mario Draghi – President of ECB at the time – said times weren’t ready for talking about Eurobond, but they weren’t far from being as well.[1]

At the time, some countries weren’t ready to share risks or willing to reach a political compromise because of the fear for instability. I would also say that times weren’t ready for sharing at all.

Indeed, going back on 2010, Monti’s proposal was about Eurounionbond (EuB), i.e. something very close to a compromise between Project bond and Eurobond. As on the opening of this article, he was concerned about growth, maybe with a favour towards stability.

Monti wasn’t a lone ranger. In 2011 Alberto Quadrio Curzio, in several articles and documents elaborated this EuB mechanism.
Issuer would have been the EDF – European Development Fund, financed by governments gold reserve, and managed pro-quota – as for every enterprise one’s rights are proportional to his stake in the company. In particular, quotas would have been calculated through an increasing factor related to equity stakes and a decreasing factor related to single state’s debt burdens. EDF would have issued Eurobond on the market at its refinancing cost, being hypothetically rated AAA; this interest rate would have been the lowest – close to the German one.

Proceeds were supposed to finance European projects and national debt securities repurchase – sort of QE or APP. On the former interests would have been payed pro-quota by states, since all of them would have earned some benefits. On the latter, they would have been paid by the country, whose sovereign were bought, at a risk premium related to its rating.

Thus, Germany wouldn’t have paid any risk premium on its sovereign and any interest concerning debt refinancing of other countries. Riskier countries, instead, would have benefit of interests higher than the risk free but lower than theirs. Further, projects Curzio had in mind were about merging companies in relevant industry cross-border, creating giant leaders on the market.[3]

This proposal was further developed by Romano Prodi and Curzio himself on the article ‘EuroUnionBond per la nuova Europa’ – Il sole 24 ore, August 23rd, 2011[4]. They proposed EFF –(European Financial Fund), funded by governments proportionally to their stakes at the ECB both with Gold reserves and other assets (national relevant corporate stock and bond), issuing around € 3000 billion in bond with a leverage of 3x and interest rate of 3%. Proceeds would have been employed to bring the average aggregate Debt to GDP ratio from 88% to below 60% – € 2300 billion – and to finance project in infrastructure cross-border – € 700 million.

Curzio’s project aimed to overcome fears of paying risk premia for risk free country. Prodi-Curzio’s one tried to balance risk of default allocation. Stakes of private company put on the plate the possibility for spreading risks on a wider base. Almost every concern, thus, were addressed and solved, but again these proposals remained a mere economic exercise, not discussed nor took into account. As for the title of this article, they tried to bribe Germany, but they failed.

[3]Alberto Quadrio Curzio, «On The Different Types of Eurobonds».